Over the last week we were informed by our colleague Chrispin Gogoda from Mzuzu University, that he had donated to the Tithandizane Orphan Care Centre on behalf of Magnus Currie.  The MREAP team was introduced to the centre as it had been selected by the MREAP project to install a biogas facility.  Over the last year we have written up several related blog posts following its progress (1, 2). Chrispin’s report:

The ladies were very happy and asked me to extend their warm regards.

When asked what they are to do with the money, they said their priority number one is to iron roof the kitchen where the biogas stoves are installed. Any remaining money would be used to help sustain the day to day operations at the centre.

To this end they requested that such good works should continue as it changes the lives of many so continued assistance to the centre is highly welcome.

Chrispin also shared a few pictures taken of the status of the Orphan Care Centre’s Biogas Project – which over the last months were being fed and are nearly ready to produce gas for cooking. 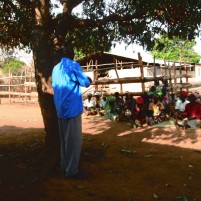 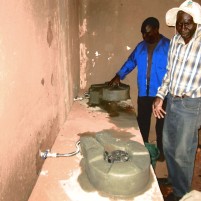 Signed for Receipt of the donation

For a brief background to the donation and Magnus’ work, he joined the Strathclyde Energy for Development team and MREAP project for a short contract from November 2013 – April 2014 primarily to help write up results, assist in communications and research, and produce media content documenting MREAP.  Existence of this blog, and the writing of a majority of the interesting stories coming from MREAP to date are due to his involvement.  He was also critical in implementing a data management process to capture energy use information from other parts of MREAP.

Magnus’s donation originates from his participation in the University of Strathclyde’s Images of Research Competition over the last year, for which he won £150($250) the category prize for Government and Third Sector and has since passed this back to the community.  His image captures the the orphans sitting and listening while work proceeds on the construction of the biogas digester in the background.  The centre cares for 280 orphans (53% are girls) and is run by 32 women in the community, who were dependent on traditional cooking (3-stone method) and wood-fuel before the biogas digester. Though this orphan care centre is better off from the biogas digester, as is shown by the plan to use donation, there is still great need to take care of the orphans.  For the MREAP team, we second the thanks from the community for this donation and recognize Magnus’ past contributions to MREAP.  Thank you!